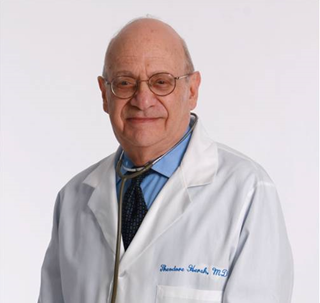 As an antioxidant expert, Dr. Theodore Hersh (known affectionately as "Dr. Ted"), utilized over 30-years of medical training and experience specializing in gastroenterology to discover the breakthrough that formed the basis of Thione International and the Thione Complex™: A specific combination of antioxidants present in almost every cell of the body that work synergistically to help boost the immune system and build up the body's antioxidant defenses against free radical related damage to the body.

Dr. Ted, also serving as Thione's Chairman, was stunned to discover that not one product on the consumer or healthcare market contained this critical combination. From this revelation the Thione Complex™ was created along with a company devoted to developing health and skin care products that utilize and aide the body's natural defense mechanisms.

Born in Mexico City, Dr. Ted's professional journey began at Harvard University followed by medical school at Columbia University and postgraduate training at Mount Sinai Hospital, the Mayo Clinic, and Harvard Medical School's Division at Boston City Hospital. After two years of private practice in Mexico, he returned to the U.S. to continue his career in research and academia at such esteemed institutions as Yale University, Baylor College of Medicine and Brown University. Dr. Ted joined Emory University as a Professor of Medicine in 1973 and continued there until becoming Professor of Medicine, Emeritus in 1996. For twenty-three years he served as Chairperson of Emory's Institutional Review Board for clinical research.

Making all of these accomplishments even more amazing is the fact that Dr. Ted is almost completely blind. In 1980, he was diagnosed with Retinitis Pigmentosa - a progressive, degenerative eye condition. This diagnosis first led to a loss of peripheral vision, followed by impaired night vision before resulting in blindness.

Dr. Ted's life altering diagnosis only increased his compassion for the medical profession and its community of patients. For seven years he continued his practice and teachings until, with his vision growing worse, he examined his last patient. He continued to serve as an administrator at the Emory Clinic for another eight years, when, with only 10% of his central vision present, he retired at the age of 62. To nobody's surprise, retirement couldn't keep Dr. Ted from his desire to make a difference. Although his sight was dwindling, his vision was never clearer.

Drawing on his clinical and academic experience, he utilized the eyesight of his wife Rebecca and together began conducting antioxidant research. It was through this research that Dr. Ted developed applications for the Thione Complex™ and founded Thione International. He continues to develop further uses for the Complex and has numerous patents and formulations under development.

Dr. Ted, a distinguished clinician, medical innovator and educator, has received awards including the Noble Foundation Award from the Mayo Foundation and Premier Physician Award from the Crohn's and Colitis Foundation of America. However, it is not awards, money or prestige that spurs Dr. Hersh forward. It is through the desire to help others overcome the same obstacles he's faced in his own life that Dr. Hersh and Thione International operate.